The Church, An Assembly Of People

The Church, An Assembly Of People 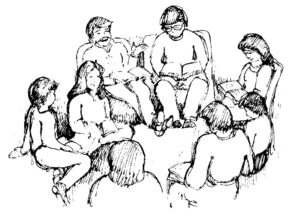 What is a church to you? Perhaps you think about a childhood experience, or traveling to see an architecturally appealing structure in a different country. Actually, did you know that a church is not a building? Simply put, a church is an assembly of people serving Jesus Christ and his Father.

To serve does not require meeting in a specific building structure. It does not have to be a physical building with an address. The Strong’s Exhaustive Concordance number is the greek reference number 1577 and helps to support this concept. More specifically, the church can be referred to as the “body” of Christ because he is the “head” of the church and other members of the church make up the whole “body”.  A church is when a group of people get together, even as small in number as two people, to understand the teachings of God and His son, Jesus Christ, to be able to enter into their future kingdom.

5. The Church, An Assembly Of People

Acts 17:16-34
In the city of Athens, the apostle Paul proclaimed to the people who the “Unknown God” was because they didn’t understand or know who the Almighty and true God was or that He sent His son to be killed or that there was even a resurrection of Jesus Christ. Paul explained this new doctrine. Some believed him, but others mocked him. Why would they have mocked Paul? Sometimes new information can be scary to hear because it is forigen to the way we used to think. In general, people like to stick with what they know because it is comfortable. God doesn’t overlook ignorance anymore such as people making idols to worship Him, instead, He now expects people to know Him and His son because we have the scriptures for a record of evidence. Some people find it difficult to believe in something they can’t physically see. Paul put it down to the fact that there is only one Almighty God who created everything: “In Him we live and move and have our being.” (Verse 28)

Acts 7:44-50
The Most High does not dwell in temples made with hands. The first tabernacle was built by the Israelites when they left Egypt and were in the wilderness. It was a temporary tent for the Israelites to perform spiritual acts of service as required under the Mosaic law. Then, a new temple was built by King Solomon. It was a permanent structure, unlike the tabernacle they used after leaving Egypt. This new temple provided a place for the instruments of God’s sacrifices and for the Israelite people to go to worship God according as the Law commanded. At this time, there is not a specific place where we are instructed to go and worship the Almighty because we serve Him in spirit and truth through faith (John 4:24).

Matthew 18:20
Even when just two or three people are gathered together in the Name of Jesus Christ, then he is also among them through the power of the Holy Spirit. This is to help them make wise decisions as church members are confronted with various problems.

1 Corinthians 16:13-21
Paul mentions a few specific individuals who were part of the “church” that was in the house of Aquila and Priscilla. Concordance definition for greek 1577 = A calling; a calling out, i.e. a popular meeting, especially a religious congregation or a community of members on earth or saints in heaven or both; assembly.

Colossians 4:7-18
“The church of the Laodiceans”. Some versions read “assembly”. Paul told them to read the epistle (letter) he sent to the church of the Colossians. Paul mentions several here who labored in prayers and as fellow workers for the kingdom. Also notice in verse 15 the church that is in the house of Nymphas. Why would Paul want this letter to be read to everyone?

Ephesians 5:25-27
The example of a husband and wife, just as Christ loved the church and gave himself for it. He sanctified (cleansed) it with “the washing of water by the word.” Christ is the Word. (John 1:1) The prophecies were not by the will of God, but of the Holy Spirit. (2 Peter 1:20-21) The intent is for the church to be clean and holy and established according to a specific structure.

1 Corinthians 12:1-31
One Spirit, one body, one church: “If they were all one member, where would the body be?” Every part of the body is necessary, and each member has their own distinct gift(s) to make up the complete body. This is the church.

Hebrews 10:24,25
Now we serve God by assembling together. And even more as we grow together in the knowledge of the Truth and diligently seek the second coming of the Son of God.

◀The Father and Son
The Holy Spirit▶