The earth was created for a purpose and will not be destroyed.

The news and media have reported the earth is in trouble. Problems vary from pollution, acid rain, climate change, the destruction of rainforests and wild habitats, the extinction of thousands of species of animals and plants. Will the earth survive these problems?

Today the state of the earth is sobering, but there is comfort in knowing what God has written in the Bible about what will happen to the earth. He will prevent man from destroying the earth and will renew the earth to become a paradise for man to live in.

The creation of the earth was described in the first chapters of Genesis. The earth and its inhabitants were made and it was a good thing in the sight of God “And God saw everything that he had made, and, behold, it was very good.” (Genesis 1:31) However, through greed and lack of respect for God’s creation, mankind has proceeded to abuse the resources God has so graciously given mankind to live off of. Fortunately, by God’s grace, the earth will be saved from mankind. 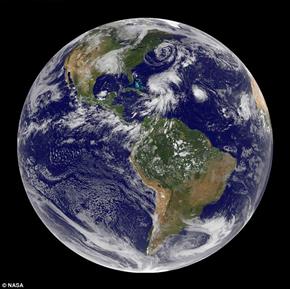 Can you imagine a perfect earth with peace for all those that inhabit the earth, and all people living forever, no more growing old or suffering? It has been promised if you believe the Bible is true. Satan will be gone as prophesied in Revelation 20:3 “And cast him into the bottomless pit, and shut him up, and set a seal upon him, that he should deceive the nations no more,…” The wicked oppressing people are all gone per Psalm 37:9-11 “For evildoers shall be cut off: but those that wait upon the LORD, they shall inherit the earth. For yet a little while, and the wicked shall not be: yea, thou shalt diligently consider his place, and it shall not be. But the meek shall inherit the earth; and shall delight themselves in the abundance of peace.”

Despite man’s attempt to destroy the earth, you will learn through this study that the earth was created for a purpose in the future. A wonderful planet designed for God’s people to live in harmony and paradise. Conditions like climate change will not destroy the earth or God’s plan for the earth.

Ecclesiastes 1:4
Generations come and go, but the earth will remain forever. The earth has always been meant to be created forever. It was not created by God to be in vain. His purpose was to create an earth that would inhabit his people, those who choose to acknowledge Him and to have acknowledged His Son. A time will come when generations will not die. The inhabitants of the earth will live forever. It is what the earth was always intended for.

Psalms 37:9-11, 29, 34
The meek (gentle) people will inherit the earth and live on it forever. Like the previous verse, the earth was not created in vain. You may have heard the saying “the meek shall inherit the earth”. This is where that saying comes from in Psalm chapter 37. And this is the context in which the saying was intended. The earth will be inhabited forever.

Isaiah 2:2-4
All people will serve one God and will no longer wage war. The point is, only righteousness will dwell on the earth. Not only will war be out of the hearts of people, but everybody living on the earth will serve only the one true God. No more hate, death, and greed.

Isaiah 35:4-7
No physical disabilities will exist for humans on the renewed earth – a new earth. Disabilities, poor, hunger, pestilence, disease, and pandemics are of this age. A day is coming when humans will not suffer from this ever again.

Isaiah 65:21-25, 17
The earth will be renewed, no one will labor in vain, and everyone will live peacefully, including the animals. The Bible often states “New Earth”. Meaning the old earth and all of its influence of evil will be gone.

Revelation 21:4-5
All made new – no more wicked and no more sorrow, pain, or death. Praise God and praise His Son for making our hope real. As you continue to follow through on all of the Bible studies you will gain in faith and in hope that better things are to come for those who want to seek true righteousness.

Questions for further in-depth study:
Isaiah 2:4 Says that nations shall learn war no more?  How is this possible?
What do the scriptures say about those with disabilities in this renewed earth?
Will the earth be destroyed by Man or God?