The following Bible Study analyzes how the nation of Israel grew and the allegory behind the prophecy in Ezekiel 16 affirms that YHWH יהוה views Jerusalem’s behavior as harlotry. Her unrepentant heart is detestable to YHWH יהוה and she will be held accountable for her behaviors. And, although her destruction will be an embarrassment, it is necessary for the purpose of cleansing the sanctuary and the ultimate restoration of Jerusalem as the Holy City of Israel. The paradoxical prophecy highlights the fact that God disapproves of Jerusalem’s spiritual sin, yet because of His great mercy, Israel, as a nation, will be saved.

A few questions for consideration:

Ezekiel 16:1-6
This is an allegory. The Israelite nation could be from the land of Canaan because that is where Abraham dwelt according to Genesis 13:12. The origin of Israel was like an unswaddled baby without a caretaker. YHWH/Jehovah (יהוה) took her in and nurtured her.

Deuteronomy 7:7-8
We have learned that the nation was chosen by the Creator, YHWH/Jehovah (יהוה) because it was His choice and the Israelites were the least among the nations – and because He loved them.

Ezekiel 16:7-14
The nation was cultivated into a beautiful and prosperous people and adorned with desirable and specialty apparel. A jewel among the other nations.

I Kings 10:1-9
Even the Queen of Sheba had heard about the wisdom of Solomon and she was introduced to the wealth and grandeur of the kingdom. She gave glory to YHWH/Jehovah (יהוה) as a result of what she saw. This relates to Ezekiel 16:14 about Jerusalem’s fame among the heathen.

Ezekiel 16:15-25
Israel deviated from the way in which she was taught by the Lord and instead committed harlotry by taking on practices of the other nations. Like literally sacrificing her own children to other gods.

Ezekiel 16:26-34
She gave rewards to all her lovers which is even worse than other whores, because they accept gifts as payment. Jerusalem multiplied her whoredoms with the Egyptians, the Assyrians, and the Chaldeans. The land of Chaldea is the land of Babylonia which is a clue about who is Babylon the Great.

Ezekiel 16:35-43
This is an allegory and continues the discussion in prophetic certainty about the whoredom of Jerusalem. Insomuch that her behaviors were not in alignment with YHWH יהוה.

Ezekiel 16:44-50
It is evident that even Jerusalem’s neighbors, her “sisters”, Samaria and Sodom, also behaved poorly. However, even their behaviors were not as bad as Jerusalem’s. Her harlotry was even worse. Jerusalem’s pride caused her to become self-righteous. She did not take care of the poor and needy.

Ezekiel 16: 51-58
Even Samaria and Sodom are more righteous than Jerusalem which is such an unbelievable statement in this prophecy because Jerusalem was the chosen and blessed people. Yet, her abominations were even worse. It sounds like in verses 53 and 54 that there will be a restoration of the people back to their first estate. Could this also be referring to a future resurrection?

Ezekiel 16:59-63
Jerusalem broke the covenant that was made between her and YHWH יהוה. Abram was blessed and this blessing was passed down to Isaac and Jacob. Even though Jerusalem forsake her agreement with YHWH יהוה, she will have a new covenant and will be ashamed of her harlotry. The Messiah, Yeshua/Jesus (ישוע) brought a new covenant but only was able to complete 3 ½ years of prophecy. Therefore, there remains yet another 3 ½ years of prophecy to complete. The new covenant that was brought enabled non-Jews to enter into the new kingdom of heaven. Even to become spiritual leaders of the future. 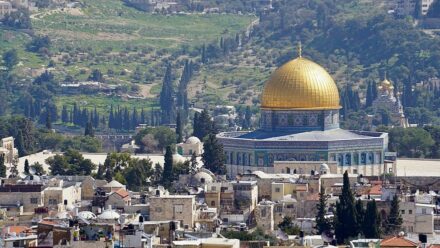 The great city that reigns over the kings of the earth is Jerusalem. She will be held accountable for her behaviors and her lovers, even the 10 kings of the Beast, have the power for one hour to turn against her and destroy her. She lived deliciously and in the pride of her heart proclaimed that she is a queen, however, in one hour her destruction will come quickly and decisively.

Matthew 23:27-39
The scribes and Pharisees were leaders of the Jewish people in their day. Yet, Christ rebuked them for their unrighteousness and explained that Jerusalem was responsible for the blood of all the prophets, from Abel to Zacharias. At the time of Christ, he explained that their attitudes still were the same as their fathers. And this was true because they condemned the son of God to death.

Zechariah 14:8-11
Eventually, in the future, Jerusalem shall be safely inhabited. It will be a safe place again.